It’s had a few days to sink in, but there’s still a feeling of unreality about Donald Trump’s historic victory in the U.S. presidential election. How could the pundits and pollsters have got it so wrong? How could Hillary’s vote have crumbled so decisively in the key swing states? In a time of such global uncertainty, how could the U.S. electorate choose a president as divisive and controversial as Trump? So many questions. And in a sense it doesn’t matter what the answers are. Regardless of the consequences, Trump is what we’ve got. It’s happened. Not just America, but the entire world has to make this work.

In highlighting some of the more contentious utterances that have emanated from team Trump in the last couple of years, the western world  has been left genuinely aghast at how the ultimate maverick has come to power. “What has happened to American civilisation?”the masses yell. “How could anyone elect Donald Trump knowing his bizarre plans to build a border wall and his polarising attitude to immigration?” Apophenia is the human tendency so see patterns and trends where none exist. As a rule, the temptation to generalise should be studiously avoided. After all, every human experience is unique and the product of a very specific set of circumstances. That’s why I’m reticent to join the chorus linking Trump’s victory to the Brexit referendum and other recent events. Like any presidential election, 2016 was the result of a series of internal stimuli and catalysts that are unique to the vast north American continent.

However, while proceeding with caution, I think there’s a discernible connection between Trump’s election and June’s Brexit referendum. It’s hardly an original thought, but Brexit and the presidential election betray a western population that’s becoming increasingly disillusioned with political norms and conventions. It’s not so much that people are fed up with mainstream political parties and individuals, but disgusted with them. What we’re seeing isn’t a mere dismissal of political orthodoxy, but a complete and unapologetic disdain for it. Protest voting on a truly global scale. Ordinary people are giving a metaphorical two fingers to the political establishment. We saw it with Brexit and again in last week’s election results.

Political norms and conventions are being rejected en masse as hordes of people express their disillusionment and antipathy at the polls. In the modern era, there seems to be very little respect for institutions and establishments any more. Politicians, businessmen, bankers, lawyers, financiers. No-one is immune. “Why should we have respect for any of them, all they do is screw us and look after their own interests?” That seems to be the prevailing attitude.  And here’s the rub. In their apathy and disillusion, voters aren’t giving up on democracy and becoming beleaguered with submission. They’re turning to some very unorthodox and unconventional alternatives instead. Farage in Britain, Trump in the States. It’s all part of a similar and wholly related phenomenon.

When people are so fed up up with the political mainstream that they vote for a candidate like Trump, you know there’s a problem. So, this is your anti-establishment candidate. A billionaire property magnate who’s the very image of privilege; a man with a giant bank balance to match his inflated ego. Hardly my definition of working class. That’s the point. Ordinary people are so fed up with low wages, limited opportunities and economic disasters, they’re prepared to countenance anyone who sounds plausible enough as a solution. How else can you explain the meteoric rise of statesman Trump? Controversial businessman. Reality t.v. star. Trump is a perfect fit for all these roles. But President? It’s taken a unique and unprecedented set of conditions to bring the hitherto unthinkable scenario to pass.

In a way Donald Trump is a president for our times. You get the leaders you deserve and this generation has got the Donald. It’s not a coincidence. In a scene from the brilliant 1980s movie Back To the Future, time traveller Marty McFly finds himself in the unfamiliar terrain of 1955 and seeks out the younger version of his eccentric scientist friend, Doc Brown, the man who built his De Lorean time machine. Naturally enough, Brown is suspicious of the young visitor claiming to be from the future and sets about asking some questions to prove his identity. “Who’s the president in 1985?, inquires Brown. “Ronald Reagan”, replies McFly. “Ronald Reagan, the actor?” exclaims an incredulous Brown-I’m reciting from memory here, so excuse me if I’m not verbatim. Eventually, though, the doc is convinced of McFly’s bona fides and realises the error of his ways. The penny’s dropped. “Of course your president is an actor, he has to spend most of his time on t.v.!” Ditto Trump. The Donald is the president for the reality t.v. generation. This is a world where substance is sacrificed for big talk and banal promises. Trump is the personification of our modern false reality.

What about Hillary? Well, it was Clinton who suffered most from voter weariness and anger with mainstream politicians and parties. I must admit I don’t feel sorry for her at all. Yes, Hillary’s lost out on the job of her dreams for a last time, but this is a mess entirely of her own making. While Mrs Clinton’s innate shortage of charisma and charm is well-documented, voters were also put off by her obvious and unapologetic sense of entitlement. Last week’s election result was an emphatic rejection of the Bush/Clinton duopoly and presidential carve-up that’s dominated the most prestigious office in the world for the last 15 years.

Yes, perseverance and stubbornness are desirable traits, but sometimes it pays to heed the public’s message. It had been signposted for years that there was no appetite for a Hillary presidency and yet the indomitable Clinton kept on coming. Never mind that she’d been consistently rejected, Hillary refused to give up. This was her turn. Except it wasn’t. The U.S. electorate ensured that. Would it have worked anyway? It’s hard to imagine Bill as “First Man”. Which reminds me of a quote from an unnamed Clinton aide years ago opining why a Hillary presidency wouldn’t work. Re: Bill Clinton: “He’s Gladys Knight. He’s not a pip.” That just about sums it up.

The winds of change are blowing throughout the world. And that’s a good thing. We shouldn’t be too cynical. People are questioning orthodoxy, challenging authority, contesting preconceptions and refusing to do what they’re told. It doesn’t feel that way, but Brexit and the Trump victory are triumphs for democracy in their own idiosyncratic ways. These seemingly earth shattering and cataclysmic events show that populism works, that change can be effected if you want it badly enough. If you’re disaffected by economic turmoil, low wages, and foreign policy misadventures, 2016 affirms categorically that the one lever for change at your disposal-your vote-can still make a difference. And that is quite a heartening thought. It’s a pity that this popular will has only been used thus far to promote eccentric and dubious causes. It’ll get really interesting, though, when the penny drops that people can use their newly found voice to do some good in this troubled world. 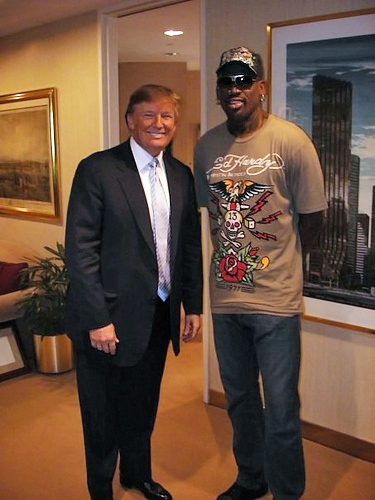 Image Courtesy of Wikipedia By OPEN Sports [CC BY 2.0 (http://creativecommons.org/licenses/by/2.0)%5D, via Wikimedia Commons