As I’m sure you know, I live in Northern Ireland. It’s a thoroughly unique and distinctive place. One of the most remarkable aspects of northern Irish life is that the region effectively has no government or administration at the moment. In fact, it currently has nothing that remotely resembles administrative efficacy. Since December last year, our government has been in a state of  semi-permanent hiatus, effectively suspended while the nominal partners in government (what a misnomer that is) embark on their latest round of bickering and accusation. Anyone who has the misfortune of following northern Irish politics with a degree of regularity will know that Stormont has become a by-word for stalemate and dysfunction; the power-sharing government and associated apparatus established by 1998’s Good Friday Agreement (GFA) have been fundamentally inoperable for some time.

So what, you might ask? Partnership governments and coalitions regularly fall apart all over the world as ideological differences and disputes prove discordant and intractable. Fair enough. What sets Northern Ireland apart is that our politicians can expect to be paid full, healthy salaries while they effectively sit on their hands and do nothing. And when I say nothing, that’s only a slight exaggeration. It’s a pretty good deal, isn’t it? And it’s us, the hard working taxpayers, who are subsidising the unjustifiable largesse and ostentation on the hill. I’ve a fair idea what would happen if I downed tools in my workplace and refused to do the job I was discharged to do. Different rules apply for Northern Ireland’s politicians, though. They’re able to make a virtue of continued inactivity, safe in the knowledge that their sizeable salaries will continue to be paid for the foreseeable future.

And, at the time of writing, there seems to be very little prospect of rapprochement  or accommodation. With two polarising elections in dangerously close proximity just ended, there seems little desire to get the exorbitant show back on the road. This ugly stalemate would be comical if the whole enterprise wasn’t so wasteful and lacking in everyday relevance. So, what happens if the circle isn’t squared? Direct Rule? More bloated and meaningless negotiations? Another bloody election? Each option carries inherent risk and danger.

What makes this impasse distinct from the countless others that have preceded it, is that it’s hard to see from where a potential breakthrough will come. Northern Ireland’s two largest parties-Sinn Féin and the DUP-appear further apart than ever and neither seem particularly vexed by the predicament they find themselves in. Indeed, some argue the parties stand to gain more by staying outside the Stormont executive while the messy melodrama that is Brexit plays out over the coming months and years.

Perhaps what we’re seeing is the emergence of a post-Good Friday Agreement era. The Agreement witnessed unprecedented euphoria and optimism throughout Ireland when talks were concluded nearly 20 years ago. Old enemies had sat down, talked (and listened) to each other and, against all the odds, hammered out a workable, if imperfect, compromise. Despite its obvious and fundamental flaws, the GFA was a valiant and venerable attempt to reconcile the irreconcilable and seemingly ushered in a new era of peace and mutual respect between the main traditions  in Ireland. The GFA’s primary attribute was that it offered something for everyone: the consent principle was enshrined for unionists, while nationalists were able to retain an aspiration for Irish unity within a new constitutional architecture that accentuated and augmented an all-Ireland dimension.

One of the primary criticisms of the GFA has always been that it institutionalised sectarianism; that instead of eradicating division it rather embraced political and religious difference and bestowed them with official blessing. Such critique is overly simplistic and ignores the laudable intentions behind the consociational ideals that underpin the GFA and its power-sharing structures.

After all, in a divided society that was emerging from a bitter and sinister sectarian conflict, it was inevitable that checks and balances were built into the new governmental architecture. One of the issues that’s hampered progress in the ensuing years  is that the GFA was predicated on perceived moderate parties (the Ulster Unionists and SDLP) leading the power-sharing administration and executive. And for the first few years of the executive’s existence, that’s exactly how it was.

However, these parties were soon completely and remorselessly usurped by their ambitious rivals in the DUP and Sinn Féin, who moved decisively to the centre and unashamedly stole their opponents’ clothes. With the UUP and SDLP at the helm, the GFA stood a fighting chance of being implemented and developed in the way its framers had originally intended. With  more polarised elements in control of the process, however, that original concept of shared government has proved much more elusive and challenging. No-one should be remotely surprised by this. A mandatory coalition comprised of sworn enemies pursuing  diametrically opposed agendas was always going to be a difficult edifice to maintain. It’s nothing short of a miracle, in fact, that the executive, under the DUP-Sinn Féin watch, lasted ten years before imploding amid acrimony and recrimination.

As precarious as Northern Ireland’s power-sharing structures undoubtedly are, we now have the destabilising influence of Brexit to add into this volatile mix. Presumably, the last thing unionist leaders and politicians wanted was the existential question of the Irish border brought to the fore in a meaningful way. And yet that’s what last June’s historic Brexit vote has done. Whatever else about the intentions of the negotiators behind the GFA, its structures certainly weren’t conceived to exist in an Ireland divided further by citizens within and without the European Union.

Indeed, one of the great selling points of the GFA was that it was to be guaranteed and stewarded by two sovereign governments, themselves inextricably linked and bound as partners within the EU. Instead, what Brexit is set to deliver is an Irish state firmly and comfortably within the EU sharing a lengthy and reinforced land border with a Northern Ireland that will be (despite the wishes of a majority of its citizens) outside the European Union; unable to avail of the protections and benefits afforded to member states. You don’t have to be Einstein to see the hornet’s nest that’s been opened up with regard to both Anglo-Irish relations and internal Irish politics.

While the exact effect of Brexit on Northern Irish politics remains to be seen (and indeed negotiated), the inert state of northern politics is altogether easier to discern. Inter-party relations are perilously close to rock bottom, cooperation has been rendered virtually obsolete, trust seems a foreign concept, compromise a dirty word, while mutual respect has been replaced by suspicion and ouright hostility. In all of this, the question arises: is Stormont worth putting back together? Do any of us actually benefit from the white elephant on the hill that’s taken inactivity and political vacuum to new levels?

They say that the definition of insanity is doing the same activity or pattern repeatedly and expecting different results. So, all aboard the gravy train for another futile journey to nowhere? Perhaps that’s where we’re inevitably headed. Or maybe the parties have accepted that alternative solutions finally have to be considered in a post- GFA and post-Brexit era. If the main antagonists have had their fill of Stormont and want to explore new horizons, that’s a perfectly valid position. What’s obnoxious to many of us is that they continue to get paid for their lacklustre and listless efforts. The suspicion lingers that the current dynamic would swiftly change if MLA’s salaries were stopped or curtailed. For the increasingly small number of people who still value the Stormont farce, this could be their only hope. 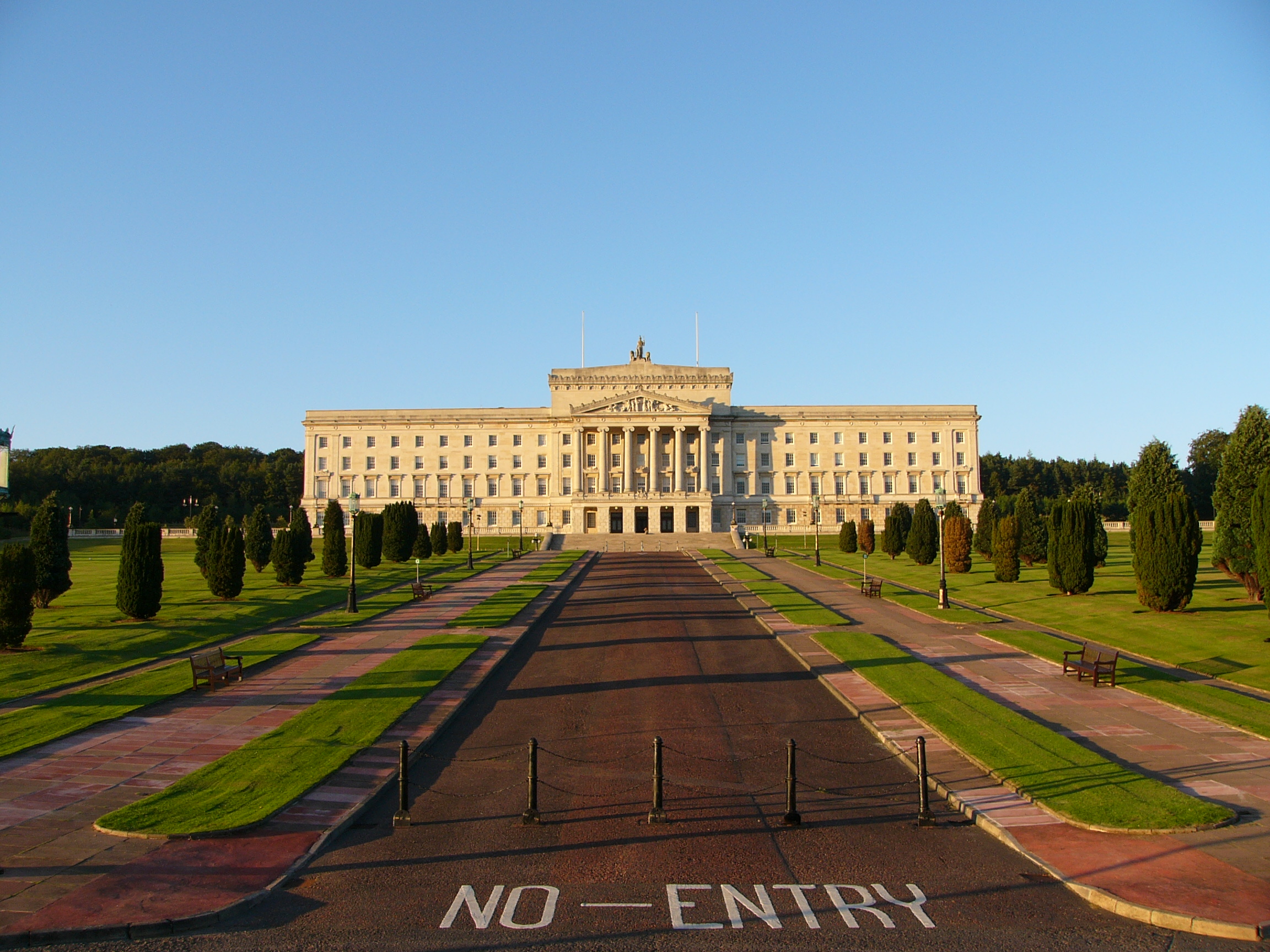 By http://www.flickr.com/photos/robertpaulyoung/ [CC BY 2.0 –Image Courtesy of Wikipedia (http://creativecommons.org/licenses/by/2.0)%5D, via Wikimedia Commons