The psychology of sport is fascinating. What makes the difference? How did Ireland transform their fortunes from acute disappointment and under-performance last week to yesterday’s acclaimed victory over a much fancied England side? In sport, coaches and players routinely talk about small margins but how can the transformation be so profound? After all, it’s the same group of players. How can we go from being utterly exasperated with our teams to thinking they’re the best thing since sliced bread? And back again! To be a sports fan is to thrust yourself onto a psychological roller-coaster that’s guaranteed to bring extreme thrills; massive highs and lows at the opposite ends of the emotional spectrum.

In elite, professional sport success, it seems, is only partially related to talent. After all, every player on display is supremely skillful and in possession of rare athletic prowess. At the top end, there’s precious little between opposing teams in terms of talent and skill. That’s why professional sportsmen and women are always looking for an edge, a psychological spur that can give them that decisive advantage over their rivals and opponents. More often than not, the difference is mindset. The top two inches. Analysing performances can be infuriating for coaches and supporters alike. Why did Ireland seemingly blow it against Scotland on the opening day but deliver in emphatic fashion yesterday? The team that struggled in Murrayfield was largely comprised of the same players that conquered the mighty All Blacks in November. What gives? If we accept the theory that the difference in performance relates largely to mindset, why do players deliver on some occasions and freeze on others?

The main problem afflicting this talented Ireland squad is an infuriating lack of consistency. Despite the quantum leap in Irish results in the professional era, there remains a tendency to struggle with the weight and burden of expectation. They’re fine when they’re written off and no-one’s expecting anything. It sits well with the Irish psyche. Ireland still struggle, however, with the tag of favouritism and the expectation to deliver. Think about it. What did the win over England have in common with the heroics in Chicago? Both occasions saw the Irish written off prior to the matches, thus liberating Joe Schmidt’s men from the restrictive burden of expectation. Ireland’s best performances still happen in the context of supporter apathy. Ireland struggle when expectations are heightened, a la the alarming under-performance in Edinburgh.

There’s something about the sight of English jerseys that brings out the best in Irish rugby players. In fact, yesterday’s win was the third time in recent memory that Ireland have denied the red rose a Grand Slam in Dublin; standing alongside the glorious wins of 2001 and 2011. I guess the thought of Eddie Jones’s team sealing a Grand Slam and simultaneous world record on Irish soil was too much for Ireland’s players to bear, inspiring them to their best performance of the championship. The home side lorded in the physicality stakes, meeting fire with fire in thwarting one of the best packs in the world. The Irish dominated their opponents with a controlled aggression that forced England onto the back foot for the majority of an enthralling contest. That’s where mindset comes in. That obdurate desire to physically better your opponent and refusal to concede. The “Mongrel Dog”, as they call it in New Zealand.

It happened more by accident than design, but Ireland’s hastily rearranged back row suited this game perfectly. When Jamie Heaslip cried off in the warm-up, his misfortune allowed CJ Stander to make the seamless transition to number eight. More importantly, Heaslip’s injury catapulted Peter O’Mahony into the side and what a commanding performance the Munster flanker delivered. O’Mahony was absolutely fantastic yesterday, covering every blade of grass in a breathtaking and superb man-of-the-match performance. There’s been some debate recently about whether the Cork man should start for Ireland. Surely the argument has been definitely settled. O’Mahony has to start. If there was a singular difference between the sides, it was the Munster blindside.

Johnny Sexton was his usual sublime self, exhibiting that unique mix of bravery and class. Robbie Henshaw was also outstanding, proving once again that he’s become a genuine leader. It’ll be a travesty if the Athlone man is omitted from Warren Gatland’s Lions’ squad. A special mention must also go to Kieran Marmion. Many feared the worst when Conor Murray pulled out during the week but the talented Marmion proved resoundingly that he belongs in this exalted company. Most satisfying of all, though, was the crucial contribution of Ireland’s inexperienced players. Dan Leavy, Andrew Conway and Luke McGrath stepped into the Six Nations cauldron and every one of them looked to the manor born. And what about McGrath’s wonderful kick to the corner near the end? Sheer class.

Ireland will look back on their 2017 Six Nations campaign with extreme regret. Yesterday’s win should have delivered the title as well as mere bragging rights. Simple as that. In fact, Schmidt’s men could have fallen short against Wales and still been in championship contention if they hadn’t flopped so badly against an improving but inferior Scottish side. Whatever about Eddie Jones’s team, no-one can deny that they’ve been fantastically consistent in the last eighteen months. A consistency that’s steadfastly eluded the men in green. Yesterday’s win was satisfying and cathartic on several levels but Ireland will only reach their true potential when they get back to delivering when it really matters. Champion teams don’t crumble under the weight of expectation. Rather they embrace it. Great squads produce the goods when they’re expected to and deliver optimum performance on a regular basis. Ireland have finished the Six Nations superbly but we know they’re capable of so much more. Once Ireland regain consistency in their game, they’ll be an extremely formidable force. 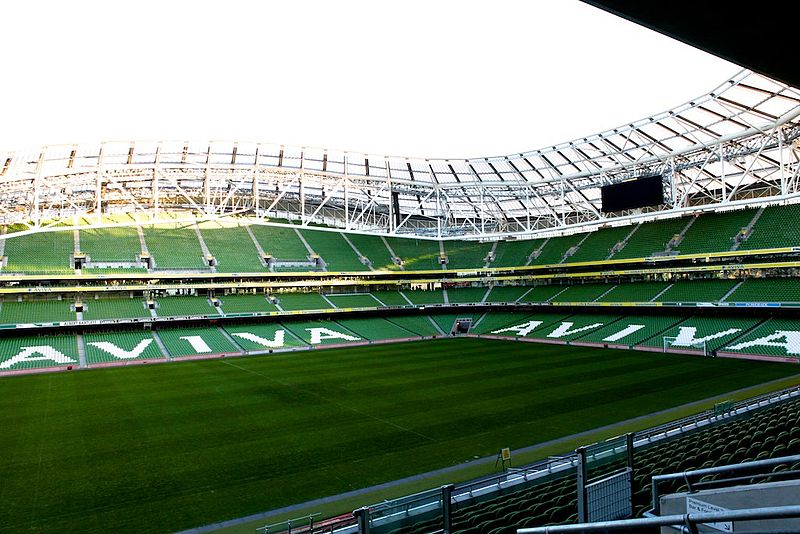 Image courtesy of Wikipedia: By Reggie Suplido from USA (The fabulous Aviva Stadium) [CC BY 2.0 (http://creativecommons.org/licenses/by/2.0)%5D, via Wikimedia Commons