On 2 August I had the pure, unadulterated pleasure of seeing Iron Maiden play in Belfast. It’s the third time I’ve seen the heavy metal giants live and, as always, the show didn’t disappoint for even a moment. In fact, the rock veterans have taken their show to new, unprecedented levels and the band now has few peers for theatre, spectacle and live performance. Indeed, I can think of few rock contemporaries capable of coming close to matching Maiden as a live act.

In observing this greatness, I couldn’t help but contrast Maiden’s near flawless, uber-polished set with the first time I’d seen them: 1996 at Belfast’s now decommissioned Maysfield Leisure Centre. Don’t get me wrong. Maiden were fantastic that evening as well, but their more recent outing as part of the Legacy of the Beast World Tour was a simply tremendous gig: loud and raucous, but also wonderfully melodic and lyrical as well.

That Maysfield concert seems like a world away in contrast. The modestly sized venue wasn’t even full to capacity and that tour happened during Maiden front man Bruce Dickinson’s six year absence from the band. Dickinson’s replacement, Blaze Bayley, is a decent enough singer but he’s no Bruce.

Indeed, the recent gig illustrates perfectly the profound wisdom of Bruce rejoining the band in 1999, alongside Adrian Smith. Call it providence, chemistry or whatever you fancy, but Maiden are infinitely better with Bruce at the helm. The band’s spectacular and consistent ascendancy since Dickinson’s return to the fold is no mere coincidence. He is among the most eminent front men in the business, possessing one of the most recognisable and powerful voices in rock.

All the fan favourites were there: The Trooper, The Number of The Beast and Fear of The Dark. The set also included a few curve balls and some numbers that hadn’t seen the light of day in a while; notably Sign of The Cross and The Flight of Icarus. The stage and light shows are as spectacular as ever. Indeed, it’s hard to imagine the overall show has ever been stronger. There’s no doubt anyone unfamiliar with Maiden’s canon could enjoy this show without needing much of  a reference point in terms of the music.

But what makes it all work so majestically is the band itself. Steve Harris still gallops around stage like a man possessed, keeping it all neatly together. Maiden’s three guitarists, moreover, are a joy to behold; working seamlessly in perfect sync and harmony. They literally never miss a beat and any group would be lucky to have them, especially the brilliant Smith. Bruce, as we know, does performance and showmanship every bit as well as poignancy; while the evergreen Nicko is perhaps the unsung hero of the piece. Individually these guys are undoubtedly supremely talented. Collectively they are simply mesmeric!

What’s even more impressive is that Maiden can still perform at this level despite having so many miles on the clock. Even the baby of the band-Bruce-has just turned sixty, after all (how wonderful to see him looking so well after his recovery from illness). When any band has been around this long, it’s inevitable, however, that questions are asked about how much longer they can continue. Sure, we’ve been asking that about the Stones for what seems a lifetime! Fans will hope that one of the best bands around has plenty left in the tank. There’s no doubt Maiden have much more to offer and some modern acts could learn a thing or two from the masters about giving fans what they want. How long can Maiden go on for? On the evidence of the Belfast show, they’ll be around for a while yet!

I’ve revealed some of my musical tastes on these pages previously. However, I’ve missed an important chapter out. After Guns N’ Roses but before I discovered The Beatles, there was Iron Maiden. Yes, the English heavy metal giants known for their epic songs, catchy guitar riffs and terrifying mascot, Eddie. I used to be absolutely obsessed with Maiden. In fact, much of my teenage years were spent dressed in black listening to Iron Maiden. I was a bit like that Teenage Dirtbag guy. I really should have got out more!

I’ve just finished What Does This Button Do? The book is the recently released autobiography of Iron Maiden front man, Bruce Dickinson. It’s an enthralling read and I recommend it for anyone remotely interested in the subject matter. However, you don’t need to be a hard rock aficionado to appreciate Dickinson’s engaging tome. The Iron Maiden singer is a man of diverse and varied tastes.

He’s a fascinating chap. As well as his singing exploits, Dickinson is a commercial airline pilot, businessman, radio presenter and novelist, to name but a few of his many and diverse pastimes. Bruce was also, at one time, an Olympic standard fencer and regularly competed whilst on tour with Maiden in their heyday.

You don’t need to be interested in any of this, though, to enjoy the book. Apart from anything else, What Does This Button Do? is a fantastic read. Penned without the aid of a ghost writer, Bruce’s autobiography is full of fascinating stories and anecdotes; told by someone with a flair for a good yarn and enough self-awareness to understand the often crazy world in which he found himself. That said, Dickinson doesn’t shy away from analysis and the autobiography gives the reader a ringside seat of a fascinating era. For this is an informed, first hand account from a man who’s lived his dreams and accrued the wisdom to tell the tale.

What Does This Button Do? has been topping the bestseller charts internationally since its release; testament in itself to the book’s innate readability. Like all good writing, it makes you want to read on and immerse yourself thoroughly in the story. This commercial triumph is a metaphor for Maiden’s own spectacular success story. For anyone unfamiliar with the back story, the band rose to prominence in the 1980s, scoring spectacular chart success with albums such as The Number of The Beast, Piece of Mind and Powerslave. Maiden’s success was built on the back of spectacular live shows and achieved despite relatively little radio play.

However, the group’s monumental early success wasn’t without cost and Dickinson left in 1993 to pursue solo projects. Maiden fans feared how the band would fare without him and, as it turned out, with some cause. The two albums recorded without Dickinson, while creditable, didn’t perform as well commercially as their predecessors and, for a time, the Maiden star waned.

The mid ’90s wasn’t a good time for hard rock as dance music and boy bands swept all before them. Iron Maiden suffered as much as anyone at a time when the music industry didn’t want to know heavy metal acts. I can attest to this dip, having watched Maiden play Belfast’s Maysfield Leisure Centre in 1996 (with Bruce’s replacement Blaze Bayley in situ). The venue wasn’t even full!

Fashions are transient but class is permanent. Something needed done to reverse the decline and the unthinkable happened in 1999, when Dickinson returned alongside guitarist Adrian Smith. Maiden’s subsequent success-from both a commercial and critical perspective-has been nothing short of phenomenal. In fact, the band has reportedly sold over 100 million albums to date! The turnaround has been quite remarkable and it’s obvious Dickinson’s return was instrumental in it.

What Does This Button Do? doesn’t dwell too much on the reasons behind Bruce’s departure and return to Maiden but it doesn’t really need to. For the book is less a blow by blow account of the writer’s history than a collection of humorous and interesting stories from a man who’s lived an extremely interesting life-and continues to. The smattering of airline stories are worth getting the book for alone and make compelling reading for those with even a passing interest in aviation.

What’s more, the candid and courageous way in which Dickinson writes about his diagnosis with, and recovery from, cancer, raises this book above standard autobiographical fare. More than anything, this is a story of creativity, entrepreneurship and imagination. A tale of a life lived to the full in pursuit of interests and passions; an affirmation of what hard work combined with curiosity can accomplish. I thoroughly recommend it for anyone inclined to give it a go. 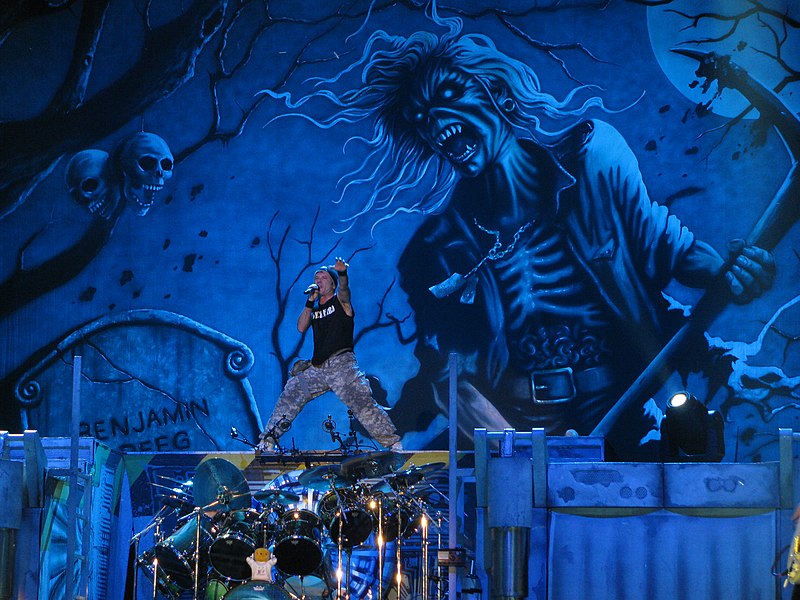 Happy New Year from rorymcgimpsey.com. Thank you for your support in 2017!